Between Consciousness discusses mental health issues and questions the perceptions and stereotypes towards persons with mental health issues. We conversed with the director of Between Consciousness, Thong Pei Qin, to find out more about how she resonated with the plot and the characters. The play has touched her deeply as she conveys her feelings through directing and leading of the actors.

I have also come to realise that people with special needs or diagnosed with mental illnesses are not so very different from you and me, and the plot of Between Consciousness echoes this exact sentiment.

END_OF_DOCUMENT_TOKEN_TO_BE_REPLACED

In celebration of SG50, five Community Development Councils (CDCs) in Singapore launched the CDCs-SG50 Book “CDCs Celebrating Communities”, published in 2015. This book shares the stories of 50 ordinary individuals making extraordinary differences in their community. Of which, it includes a TheatreWorks’ story. The TheatreWorks’ story focuses on Ahmad Musta’ain, our past winner of the TheatreWorks’ 24-Hour Playwriting Competition (Open Category) in 2010.

Ahmad’s winning play, Serunding was developed by TheatreWorks and presented to numerous community centres in South-East and North-East districts. In his story, Ahmad shares how Serunding / TheatreWorks have made contributions to the community through raising awareness on issues and inspiring others.

Once it hit the stage, Serunding made its audience think hard about the importance of parent-child relationships and raised awareness about this sometimes complicated topic. 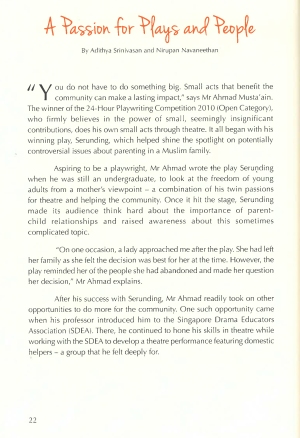 Thank you CDCs for sharing this with us!

We spoke to Isaac Lim, playwright of Between Consciousness which won the Open Category of TheatreWorks’ 24-Hour Playwriting Competition 2015. Developed as an engagement programme by TheatreWorks, Writing & Community Programme aims to nurture emerging playwrights and develop new plays.

Through the conversation, Isaac shared his thoughts and experiences on the programme, as well as how this programme has helped as a playwright. Between Consciousness is currently in rehearsals and will be presented as Theatreworks’ annual Performance Tour to the South East District from February to March 2016.

TheatreWorks’ Writing & Community Programme is an excellent stepping stone, to not only bring their voice out there, but also for the community to interact, know of the talents, and connect with the arts.

END_OF_DOCUMENT_TOKEN_TO_BE_REPLACED

Kicking off 2016, TheatreWorks Writers’ Laboratory’s Writing & Community Programme, in partnership with South East Community Development Council (CDC) is proud to present the Performance Tour of Between Consciousness to the South East District. Written by Isaac Lim, Between Consciousness is the winning play of TheatreWorks’ 24-Hour Playwriting Competition 2015 (Open Category).

Synopsis:
A father struggles with his autistic child and people’s ignorance.

A man fights with depression, and his dream of becoming a doctor.

People all have voices in our heads, and we do crazy things to reach our goals and aspirations. But we still have a stigma associated with mental illness, why?

Do stay tuned to the blog for more insights and behind-the-scenes of the production leading up to the performance. Get up close with our creative team as we share our conversations with Thong Pei Qin (Director), Al-Matin Yatim (Actor), Ivan Lim (Actor), and Gerald Leow (Set Designer) about creative processes, thoughts and personal experiences.

There was an error retrieving images from Instagram. An attempt will be remade in a few minutes.

Writing In The Thick Of Now: A Devising Performance Workshop by Manuela Infante

Script Analysis Workshop: The Reunification Of The Two Koreas

Writing from the Heart Dec 2014